*Images here are for reference only, the actual appearance maybe different.

Mister Softee is an ice cream vendor in Hong Kong. In Hong Kong, Mister Softee (Nowadays called "Mobile Softee", Chinese: 富豪雪糕), consists of a number of ice cream trucks. The red-white-blue outlook of the trucks, and the Blue Danube played by them, are part of the collective memory of many Hong Kongers.

The first truck, which had been imported from England, began to operate in 1970. Today the company has 14 ice cream vans running on Hong Kong Island, Kowloon and the New Territories. The headquarters of the company is located in Fo Tan.

As the Hong Kong Government has stopped the issue of new hawking licenses since 1978, and the existing licenses cannot be transferred to other vehicles, the old trucks are still running on the roads of Hong Kong. Each van, as required by the law, comprises a soft ice cream making machine, a basin, and tworefrigerators.

The trucks sell only four products:

Remark: Above information is for reference only 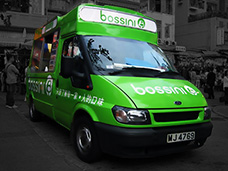 You can just start your Ad from 2 weeks!
Where the Ice-cream Van serves?
Those Mister Softee Ice-cream Vans can be found at many hot area, such as Central, Causeway Bay, Tsim Sha Tsui, Mongkok, Stanley and Saikung, they usually stop next to schools and train stations, also at some main estates and shopping centres.
Serve Locations:
What we could offer?

*All logos and trademarks are the properties of their respective owners

Please feel free to contact us for more details.